On 25 June 2020, The Trustees Freemasons’ Hall Arthur Square, acquired ‘Solomon Building the Temple’ preparatory work in commemoration of the 150th anniversary of foundation stone ceremony by Sir Charles Lanyon. The Trustees as guardians of this significant masonic artefact are mindful of its nuance particularly in Antrim. From a size 14.5 inch long and 3.25 inch high it was scaled and replicated to adorn the Provincial Grand Lodge Room, Rosemary Street, Belfast.

Operative masonry is eloquently illustrated by artist, John Luke for speculative masonry education. His imagery fulfils the legend expressed of stone mason’s progression and adopted by Freemasons as a teaching method with roots in the earliest recorded periods of human history.

With the main figures equally hieratic and active working parties subsidiary in the corners, the whole composition was in fine accord to the Palladian decorum of the pillared hall to which it was commissioned. The artists instruction, or the brief regarding the contract is unknown. However, within the Irish Constitution the mural may be interpreted to exemplify, time immemorially, Masonic allegory.

The artwork is an imagery full of clues and may be construed to suit differing sentiments or reasoning. Nevertheless, and simply put, the scene is that of a building site. The key decision makers are reviewing the progress of the build while in the background a temple is being constructed.  It is observed that…

Entered Apprentices (left side on artwork) - bring heavy work of rough stones from the quarry.

Fellow Crafts (right side on artwork) - do more accurate work with tools making the stones precise.

Master Masons (four central figures) - viewed left to right, 1 King Solomon, 2 The Jewish High Priest, 3 Hiram Abiff the Chief Architect and 4 The Chief Overseer. Three key figures have long tunics that indicate they do not engage in operative masonry themselves whereas the Chief Overseer in a shorter tunic is attired like the other workers and would engage in labour and the inspecting of work.

Hiram King of Tyre is absent from the scene as he remained largely at home having sent Hiram Abiff to assist King Solomon. Also, there is only one figure in kingly attire.

King Solomon - holding a sceptre with his right hand while pointing to drawings with his left hand, looks toward Hiram Abiff.

The Jewish High Priest - is most prominent with a captivating golden breast plate. The twelve precious stones representing the 12 tribes of Israel and can be considered as 12 different letters set on a golden plate.

Hiram Abiff - both hands on a drawing positioned on a table and is accompanied by the Chief Overseer holding other drawings.

Queen of Sheba - holding a feathered fan approaches from left, with accompanying guards.

By introducing a female, which is not within Irish Masonic Craft tradition, it is reasonable that John Luke was accrediting the Biblical narrative of King Solomon and Queen of Sheba to the era. And of general masonic understanding…

Three Principal Officers - in a craft lodge are The Worshipful Master, Senior Warden and Junior Warden. They represent the three symbolic Grand Masters who headed the building of the King Solomon’s temple. Namely Solomon King of Israel, Hiram King of Tyre and Hiram Abiff.

Working tools - the square and dividers.

Note: some of the more noticeable differences between the original preparatory work and its final execution is; a worker is excluded from ramparts, as are a second wooden lifting apparatus, and working tools in the foreground by inclusion of a golden level.

Renown Belfast artist John Luke was commissioned in the spring of 1955 by local architects Young and Mackenzie to participate in their project of The Provincial Masonic Hall, Rosemary Street. He was tasked to depict ‘’Solomon Building the Temple’’. Whilst the mural, 31ft long and 7ft high, is no longer owned by the Province of Antrim, the significance and importance of its imagery remains poignant to Masonic scholars. 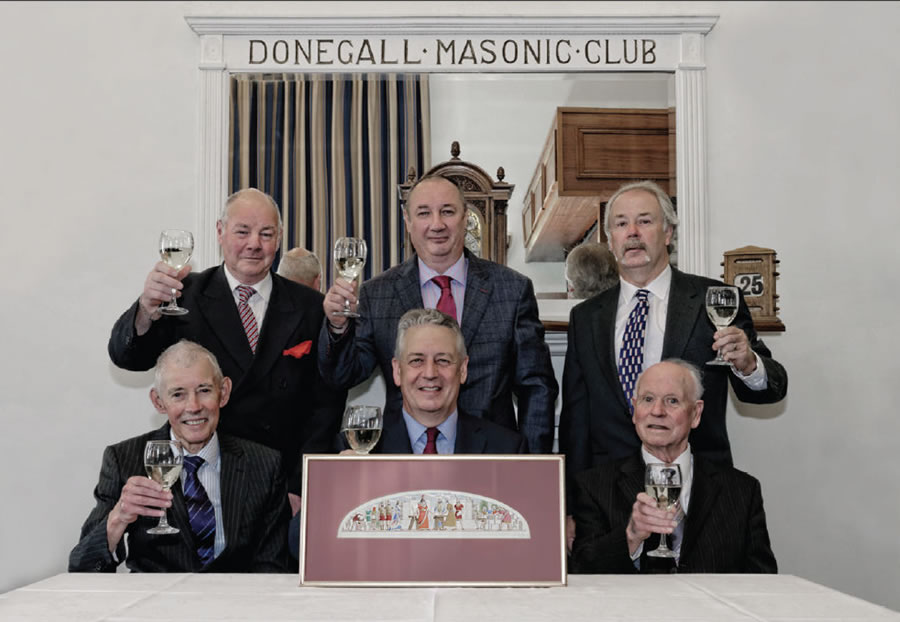 Acquisition of ‘Solomon Building the Temple’.

For further reading a paper:  ‘An Interpretation of The Luke Mural and the relevance to Freemasonry’ by W Bro Nicholas Dallat