During my tenure as Trustee, alongside A.R.G.R. Patterson and A.V. Rodgers, encompassing the period of refurbishment and modernisation to the Hall in 2006, an observation arose that no ‘war memorial’ was in situ. Although the Hall was functioning during both the Great War 1914 - 1918 and the Second World War 1939 - 1945 in which many Freemasons served, neither a Roll of Honour or Memorial exists to the Donegall Masonic Club or Hall membership within Arthur Square.

It is uncertain as to why this should be the case, particularly during the Victorian era when memorial brass plaques embellished buildings, to honour and remember Ulster’s soldiers. Maybe, that absence, that Masonic pretext of not promoting public gratitude also extended to memorials. It is acknowledged that some individual lodges, or lodge owned halls, did commission memorial scrolls either on parchment or brass for their private display. But no collective listing was gathered regarding Arthur Square members at any time, to any conflict. Similarly, neither has Grand Lodge of Ireland a census of Irish Freemasons’ service, whether in war or United Nations deployment.

Whilst various individual lodge listings are now complied, it was considered that to commence with a date of yesteryear to accomplish an inclusive Hall listing, would be an academic project. Lodges being constituted, warrants returned, lodges relocating from or joining Arthur Square discouraged the feasibility in maintaining a factual listing.

Hence, it was decided not to rush the memorial quandary at the time of completion to Hall refurbishment works in 2007 as the Trustees remained to be convinced of an appropriate resolve. Progressing matters became hindered due to Masonic commotion however the memorial vision remained. The then impending 150th anniversary marking the Hall being ready for occupation, reignited the ambition to establish a memorial.

As being a past Trustee, I was accordingly entrusted to minister continuity to the unfinished vision for a memorial within the Hall. Collectively, we concurred that it should be distinctive by not replicating design of long erected war memorials. Rather it will be a contemporary Memorial Stone edifying in its purpose, to remember all, wherever displaced, without distraction to its solemn reason and universal homage. 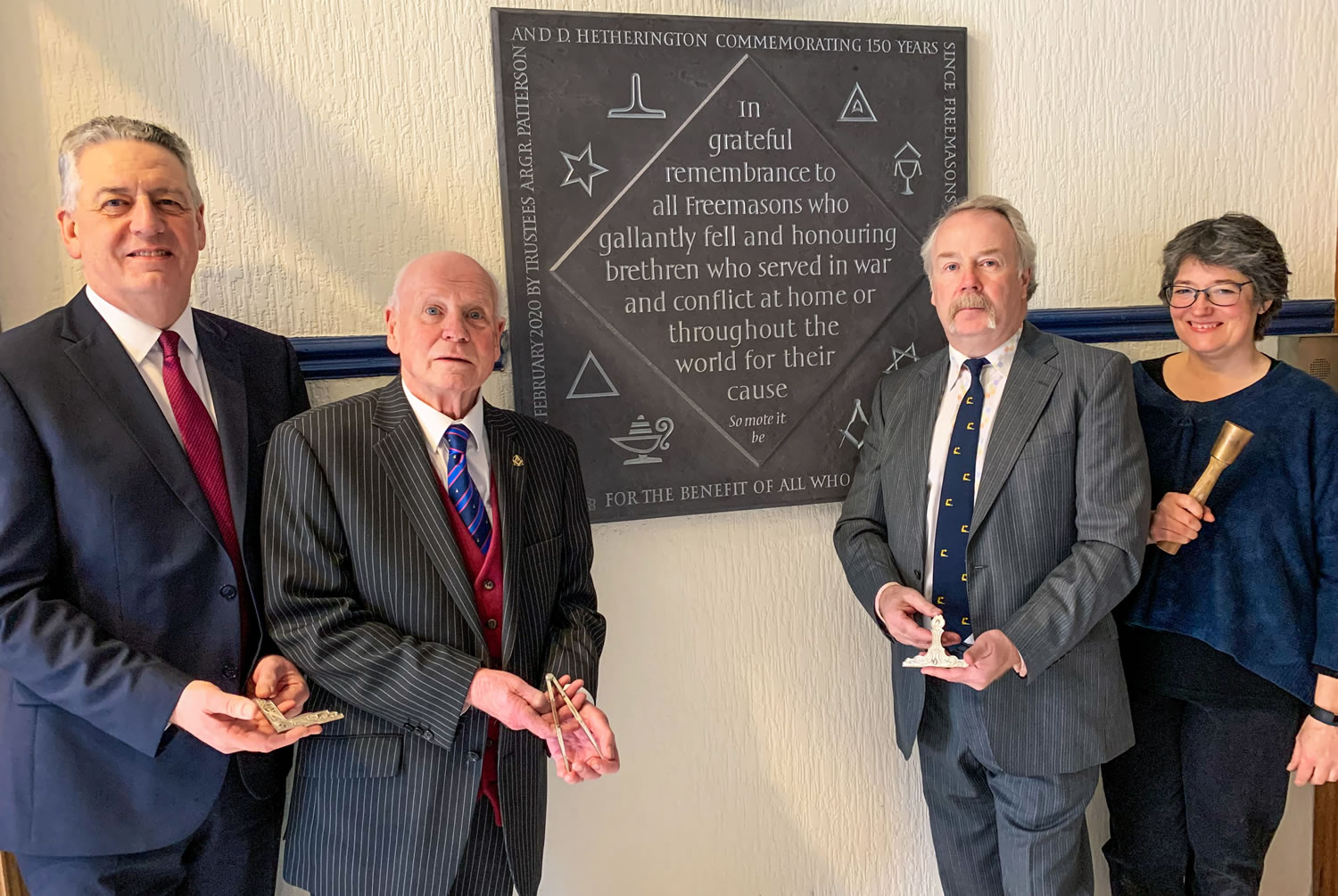 As previously alluded, the memorial was envisaged pre 2006 and the then serving Trustees decided not to affix a memorial for mere expediency or irrelevant timing. Consequently, the current Trustees reduced room reservation fees to commence the rollout of several important Hall anniversary dates. First lease; foundation stone; Sir Charles Lanyon grave maintenance and acquisition of an original John Luke artwork were scheduled in a timely, non pompous approach.

It was further concluded not to infringe on the Great War centenary or commemorations marking Second World War tributes, or D-Day Landings events, as they behold such distinction. Nor, was it deemed appropriate to divert attention from the plethora of Provincial Grand Lodges’ anniversaries. Therefore, the Trustees now having their own auspicious date, they dedicate the Memorial Stone, on the 1st February 2020 to mark when the Hall was ready for occupation; one hundred and fifty years ago - 1st February 1870.

1 Honour Freemasons who served in war: 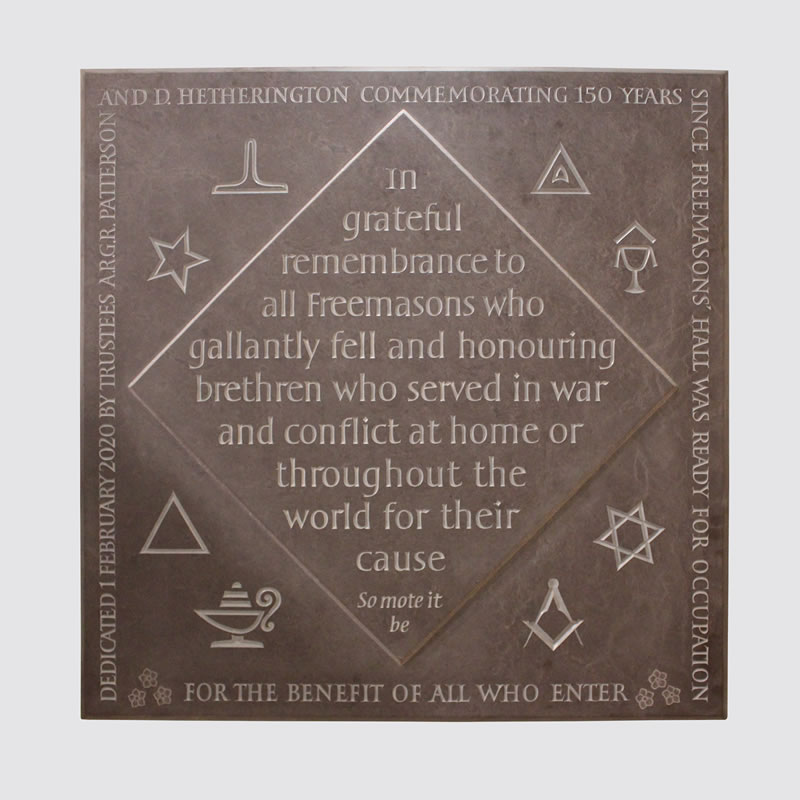 ‘Let those who come after see to it that their names be not forgotten,’ is a renowned adage. Regrettably, whilst the names of Freemasons may not be listed, ‘we will remember them.’ The Memorial Stone at Freemasons’ Hall Arthur Square now assists to their remembrance.

During 2018 the Trustees developed their deliberations and set a pathway to the Memorial Stone installation. Artist Charlotte Howarth was approached and commissioned to undertake the project. She is distinguished for hand drawn carved lettering and carvings which create individual works of art, that showcase a love of words, form and material.

Subsequently, the material chosen is from a quarry in County Kerry. Valenta Slate has furnished the Houses of Parliament, St Paul’s Cathedral as well as Westminster Abbey and Cathedral. All constructed in the same Victorian period as Freemasons’ Hall Arthur Square origin, since 1st November 1867 lease.

I am thankful that The Trustees, A.R.G.R. Patterson and D. Hetherington have now completed another aspect of positive legacy. May my successors remain optimistic that the anniversary date to Freemasons’ Hall Arthur Square being ready for occupation and the Memorial Stone will educate of Masons’ contribution to society, for the benefit of all.