James Vance was born at Ayr in Scotland on 25th December 1873 to John Vance and Annie Dunlop and gave his place of residence as Glasgow when he married Margaret Glenn at Ballywillan Presbyterian Church near Portrush on 24th November 1899 and they were living at St. Vincent Street from 1910. They had seven children, five boys and two girls, the first child being born at Montgomery Street in Glasgow on 2nd October 1900 and the last child, George, being born on 18th May 1913 – he died of Laryngitis and Bronchitis in the family home on 21st April 1914.

James was a Tramway Inspector and he enlisted with the Royal Engineers on 28th January 1915 and was deployed to France in October 1915 as a Motor Cyclist Despatch Rider with 36th Divisional Signals. In September 1918, he had fourteen days home leave before joining a depot unit in October 1918. James was still in the army when the Treaty of Versailles was signed on 29th June 1919, after which the British Government designated 29th July as the date for Peace Celebrations and Belfast Corporation decided to hold Peace Day Celebrations on 9th August.

On 6th July, James Vance was riding his motor cycle at 20mph along Corporation Street when he collided with a hackney cab exiting from a side street and was struck by the horses. James was taken to a nearby public house and later transferred to the Military Hospital at Victoria Barracks in an unconscious state with contusions to the head and a broken collar bone. The hospital records show that he experienced periods of lucidity and improvement but the entry for 16th July records that is condition had worsened, he had lost speech, was dull and stupor had increased. On the same day, his transfer to the Class Z Reserve took effect.

On 18th July, the record reports that the coma had deepened overnight and James Vance died at 2:30pm without having regained consciousness. The official cause of death was recorded as haemorrhage over brain as a result of fracture to the skull.

He was buried on Tuesday 22nd July and representatives of Tyrian Mason Lodge 182 and Olive Branch LOL 1910 attended.

The Belfast Telegraph established a fund to raise money to aid his widow and six children. The jurors from at least three trials donated their jury fees to the fund and a women’s football match was organised for 11th August between the Belfast Whites Ladies team and the “Old Crocks”, which raised £40 for the fund. The final amount reported in the Belfast Telegraph on 22nd August was £298 17 shillings and fourpence, which equates to approximately £16,150 in today’s terms. 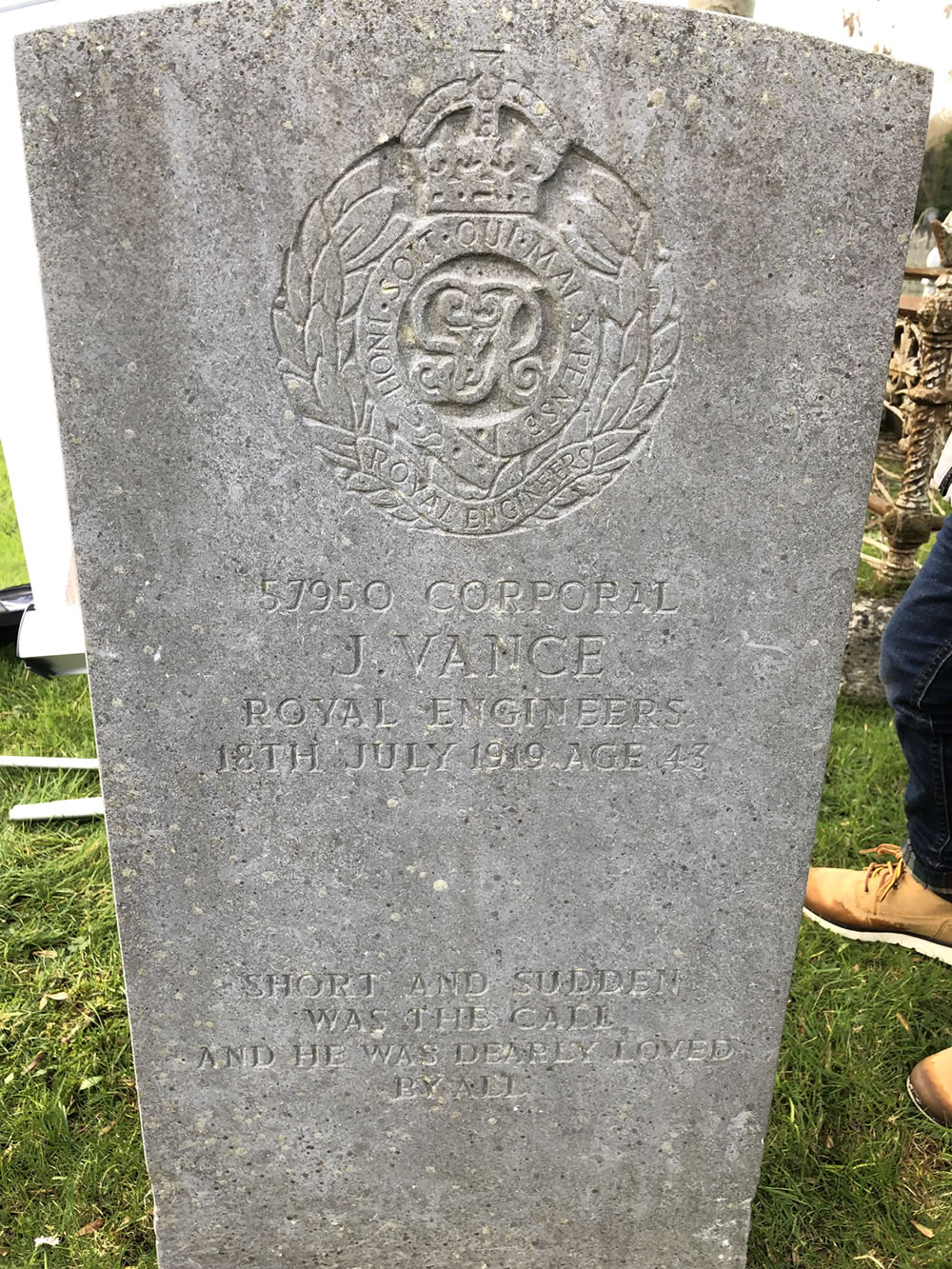 James Vance is commemorated on the Roll of Honour for Castleton Presbyterian Church.