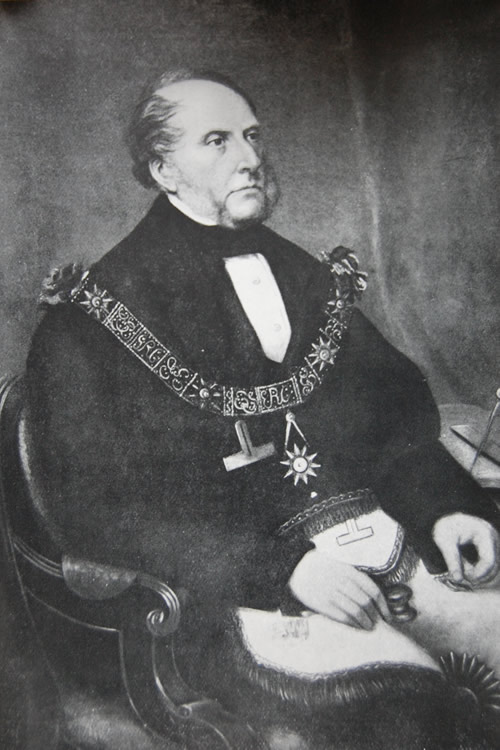 R.W. Bro. Sire Archibald Alison, Bart., became Grand Master of the Provincial Grand Lodge of Glasgow in 1847, and held the position until his death in 1867. He was called to the Scottish Bar in 1814, and became Advocate Depute eight years later. He was a prolific writer, on both law and history, and toured Europe after the Napoleonic Wars in quest of material for his famous “History of Europe”, which ran into fourteen volumes. He was created 1st Baronet by Lord Derby in 1852.

This picture was authenticated and certified by V.W. Bro. Stevenson Cochran, PG Secretary of Glasgow. The earliest notice of this picture is found in a minute of “Lodge of Truth”, No. 22, as follows:-

“August 2nd, 1864. A deputation waited on this lodge relative to a ballot for an oil painting in gilt frame, representing the R.W. the Grand Master of Scotland. It was unanimously resolved to take 12 tickets at 2s. 6d. each”

This manifestly refers to the portrait of Sir A. Alison, although he is incorrectly described as Grand Master of Scotland instead of Provincial Grand Master of Glasgow. Another reference is as follows:-

“Sept 6th, 1864. Bro. Freeman called to inform the lodge that the ballot for the painting of the Grand Master of Scotland had been postponed, and that the tickets were reduced to ½ each.”

There is no further mention of the ballot, but the winning ticket seems to have fallen to Lodge 272, as a small metal tablet engraved 272 is affixed to the frame. It is unfortunate that the records of Lodge 272 of this date are not in existence, or we might have learned more from that source as to this interesting picture, including the name of the artist which is, at present unknown.