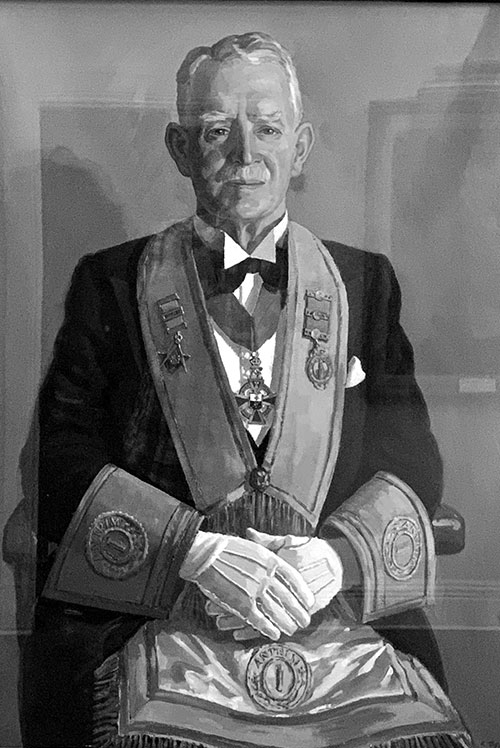 ‘The Richard Irvine Lodge 255, celebrated its 50th anniversary of constitution with a special thanksgiving service in Lodge in October and the following month a festival dinner was attended by members and friends. During which the Grand Master had the pleasure of unveiling to R.W. Bro Richard M. Heaney, P.P.J.G.W., representative to Grand Lodge of Denmark at Grand Lodge to mark his jubilee of membership, the first initiate of the Lodge.’ The jewel which he adorns is that of Denmark as aforesaid.

His passing in 1953 dictates that the portrait was merely five years of pleasure to him.

Belfast born, adapted an impressionistic style working in oils, watercolours and pastels. Commenced employment as an apprentice lithographer and persuaded his employer to send him to the Belfast Art College 1936-41. Made a member of Royal Ulster Academy in 1975 and the Ulster Water Colour Society in 1983.

Exhibited regularly throughout Ireland, Europe and America. His work is held in various notable collections, including The National Self Portrait Collection and the University of Limerick.