As part of the 2020 Reflections outreach I believe this paper will adequately enlighten that good governance sustains. There is no doubt that the Order retains admiration to the wisdom of those who embarked in creating Freemasons’ Hall Arthur Square. The prudence by those who signed the inaugural lease on 1 November 1867 has boded well. Renowned architect Charles Lanyon was one of the founding signatories and his esteem still brings praise today.

Subsequent Trustees have continually conserved their inheritance while adopting appropriate changes to excel member’s aspirations. The Hall is proficient to compliance of statuary regulations to club licensing, building control, catering, fire and accessibility. This jewel in the crown of masonry positively contributes to enrich the Orders image, in promoting usage by general society, which fulfils ‘for the benefit of all who enter’ ethos. 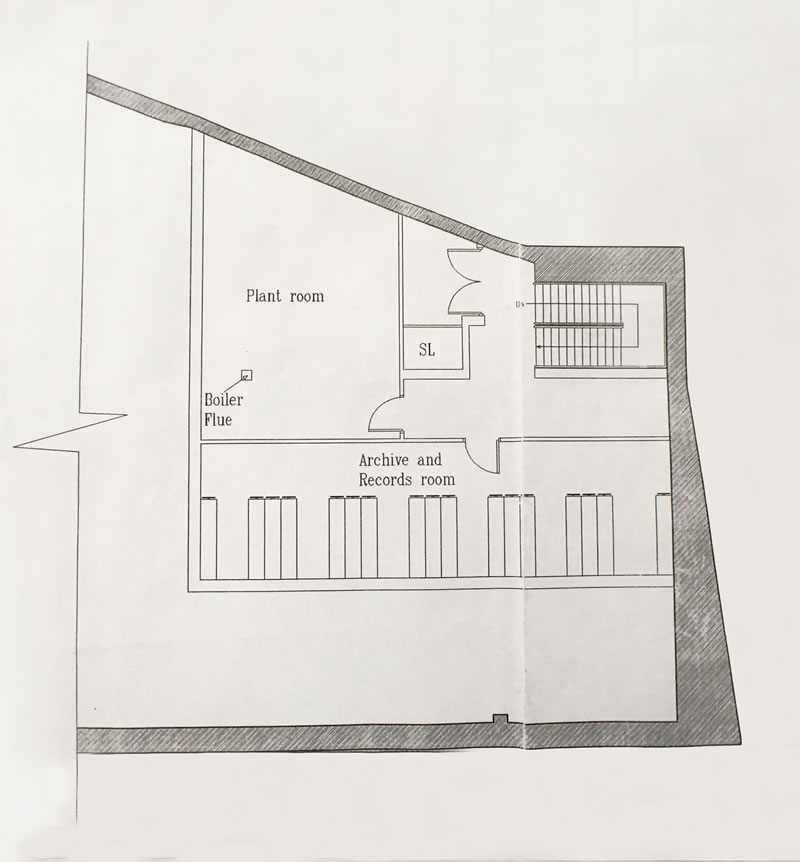 The solid foundation to the Halls long existence is due to the rental income received from the ground floor shops since inception 150 years prior. Subscriptions by members have been a trivial contribution to the financial security in maintaining a Masonic presence in the heart of Belfast. In reality the delivery and servicing of amenities to members within the upper floors is sustained solely because of the shop rental income.

Property custodians, to any organisation have an indisputable fact of rising costs, falling income, reduction of members thus making the discharge of their care extremely fraught. This problem is particularly acute to Masonic Halls which are owned and maintained by a singular lodge. Often the greater portion of member’s dues is dispersed as capitation tax to furnish administration by Provincial and Grand Lodge. Member’s contributions within Arthur Square were no differently viewed. Even during a period of time when the yearly Hall levy of £1.00 per member, was generating a mere £1500.00, the actual Masonic running costs were exceeding tens of thousands of pounds per annum. 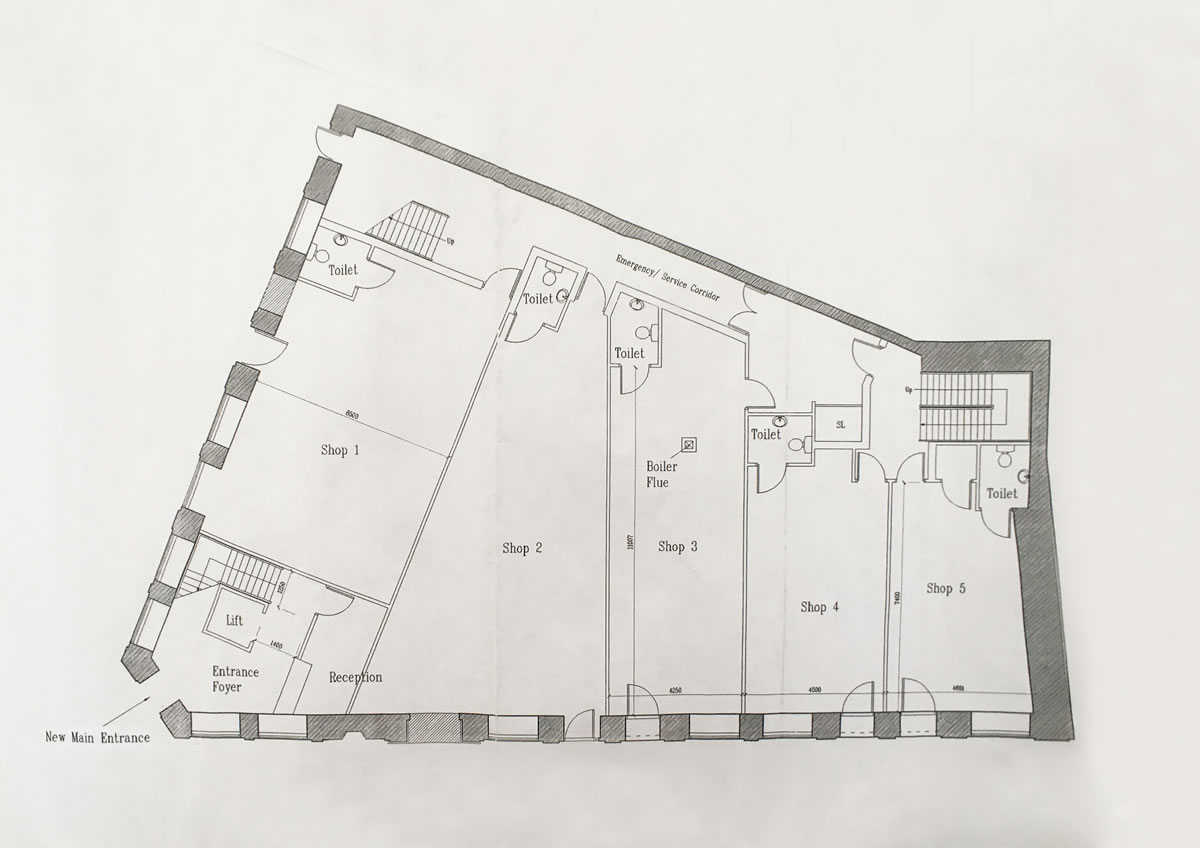 Past Trustees undertook significant improvements such as installation of electric, oil fired heating, a lift, remodelling to The Donegall Masonic Club and various upgrades to kitchen and function rooms. Also the decorating, repairs, cleaning, wages to caretaker and door commissioners were managed by respective Trustees while crucially ensuring that the shop units continued to be let. 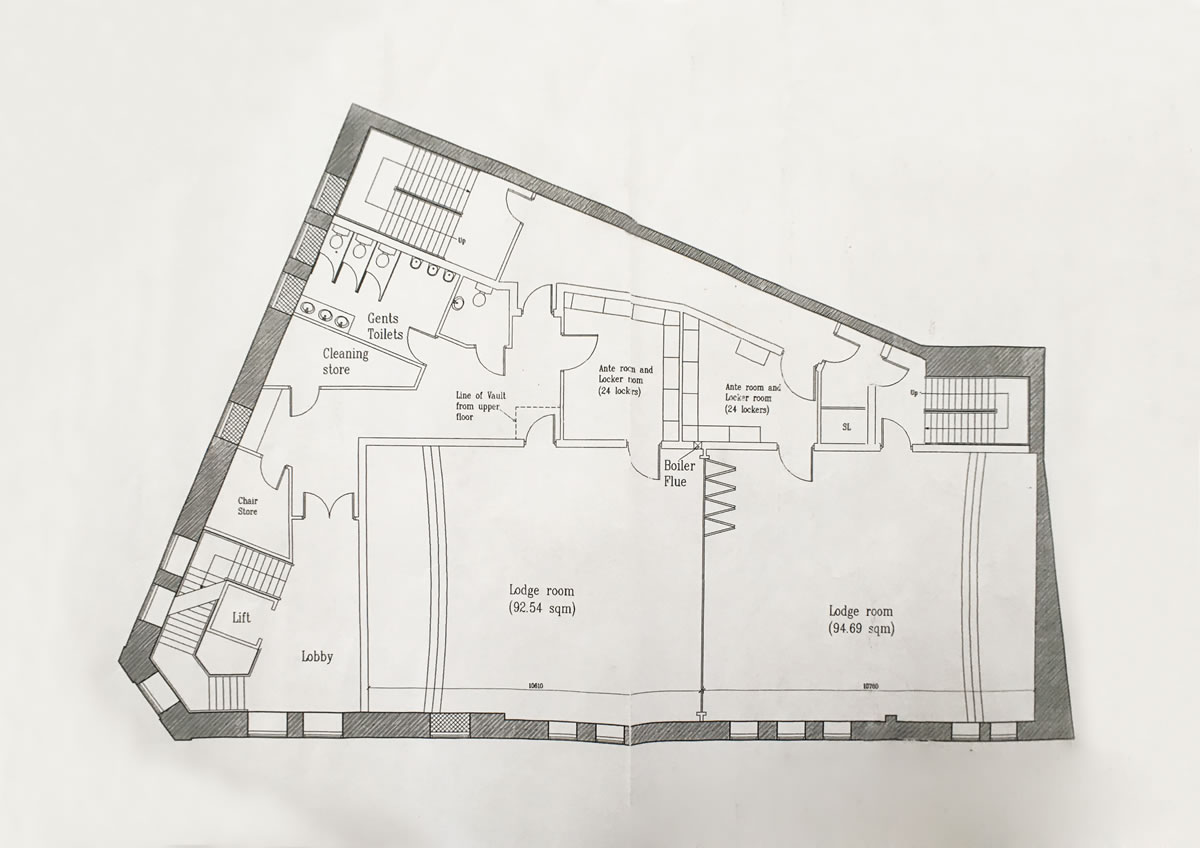 It was during my tenure as Trustee that external factors and more greater demanding regulations that could have brought about the eradication of the Hall and Masonic ownership. Despite the building having largely survived city centre bombings all off its internal fabric was antiquated. The demands of care taking and maintaining services were becoming more exorbitant. Neither the Hall nor its members were proficient to fully adopt Provincial Grand Lodge Of Antrim recommendations as detailed by ‘Report of the Committee of Younger Master Masons 1987, which was instilling a very heartening future to the Order, in every hall, for every member.

It was the Victoria Square regeneration scheme and our local governments approved developer’s intention to compulsory vest the Hall that brought fortitude by the Trustees equal to that of their founding forbearers. However, vesting was abated and the largest Masonic building project within living memory was embarked. The appointed building contractor S M Olivier & Sons started April 2006 and finished the works on time, June 2007. Earl Lewis Ltd, the Quantity Survey ensured that the project was completed within the £2 million projected budget and enthusiastically assisted the Trustees on other dynamics which became associated to their needs. 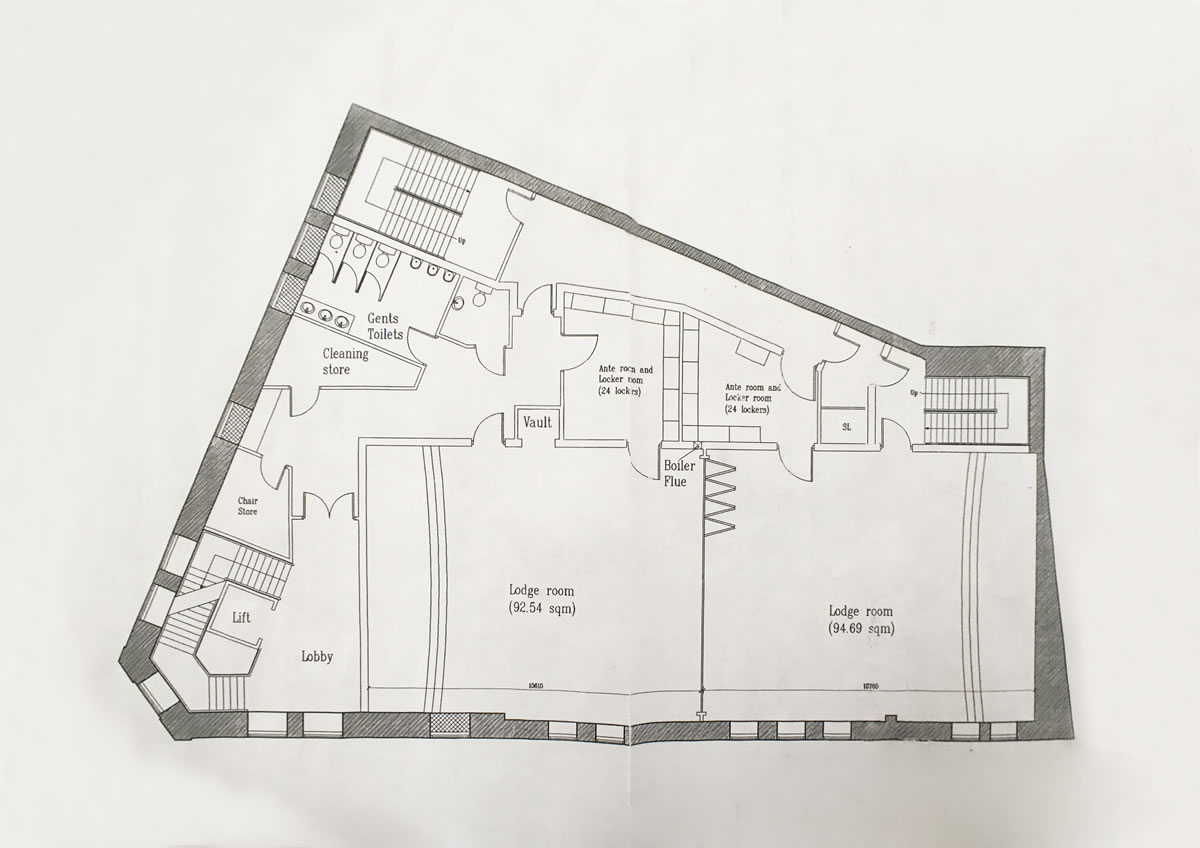 With vesting now successfully withdrawn the Trustees commenced the process of refurbishment designs and costs but continued dialog with Victoria Square developers. As the developer had shown strong desire to control all of the building, not just the shop units, the Trustees prospered an alternative pathway. In lieu of renting the entire property to the developer they could acquire and modernise Provincial Masonic Hall Rosemary Street on behalf of Arthur Square Trustees. It was however the shortness of time that brought closure to this scenario by the developer and not flawed financial outworking.

Hall Trustee’s conversations with Provincial Grand Lodge Of Antrim became more central as Arthur Square could only be extensively refurbished by lodges moving temporally to Rosemary Street before it was sold. Thereupon the Trustees directly offered to purchase Rosemary Street for a nominal £1. The Trustees would then own two properties, of which all floors in Arthur Square would be the source of substantial increased income. Within Rosemary Street, it was envisaged that no other lodge other than those residing would be liable to contribute. Provincial offices could remain if they so decided on a tenants lease borne by the lodges in the Province. I can only surmise that the myriad of committees in Provincial bolstered by apathy that the sale of the Provincial Masonic Hall was less of an effort to manage notwithstanding increasing the nominal offer to £10. 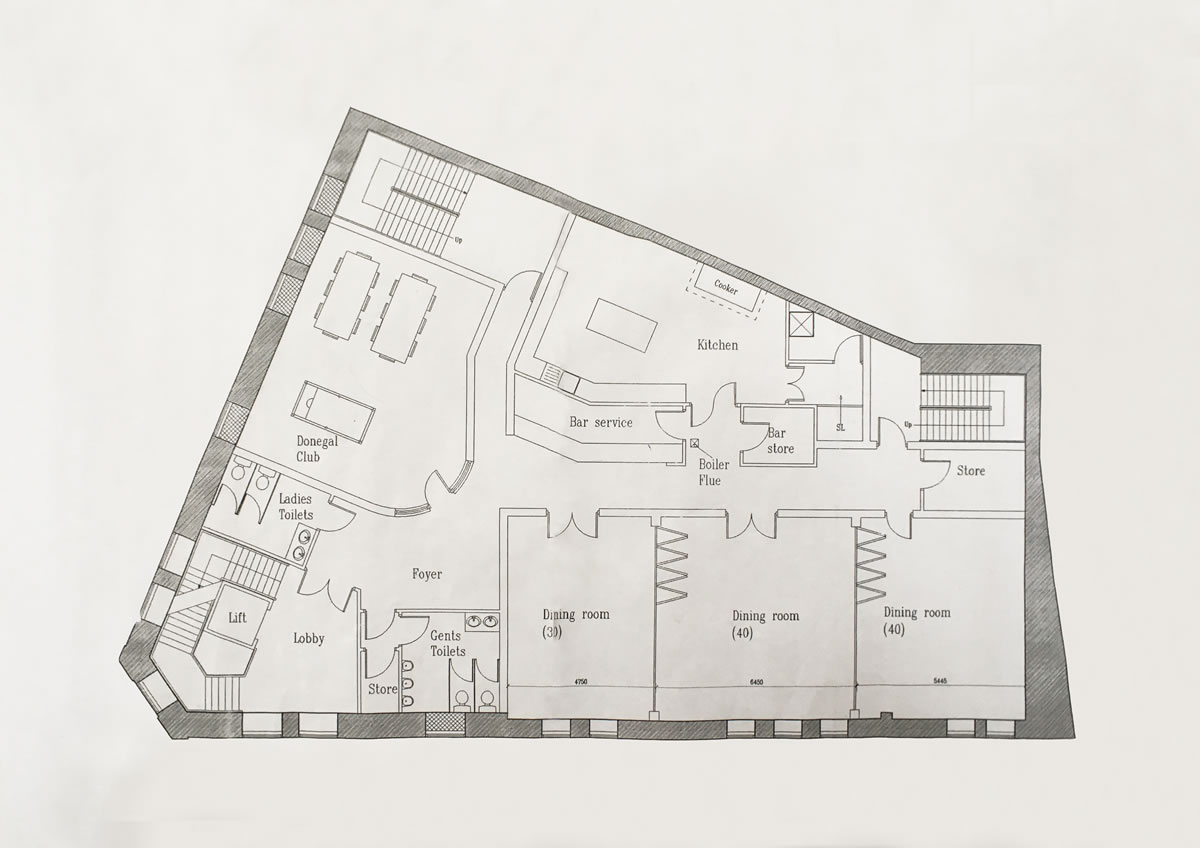 Much deliberation and various options regarding the scope of works and how to achieve them were in hand by the Trustees from 2002. During May 2005 an additional new build section as a 5th floor aspect was forwarded as architect drawings to Provincial Grand Lodge Of Antrim for their consideration and also the caretaker’s accommodation. As the scheduled commencement date to refurbishments works was April 2006 the Trustees instructed the architect, R Robinson & Son during November 2005 to proceed with only an additional new build section to a 4th floor aspect and retain caretakers flat for conversion with a new own door access. It was disappointing that Provincial Officers of Antrim could not avail of an opportunity to return to what was once their previous home nor inform their Board of General Purposes for wider contemplation. Maybe a more open and transparent process to the brethren may have instilled a different outcome. 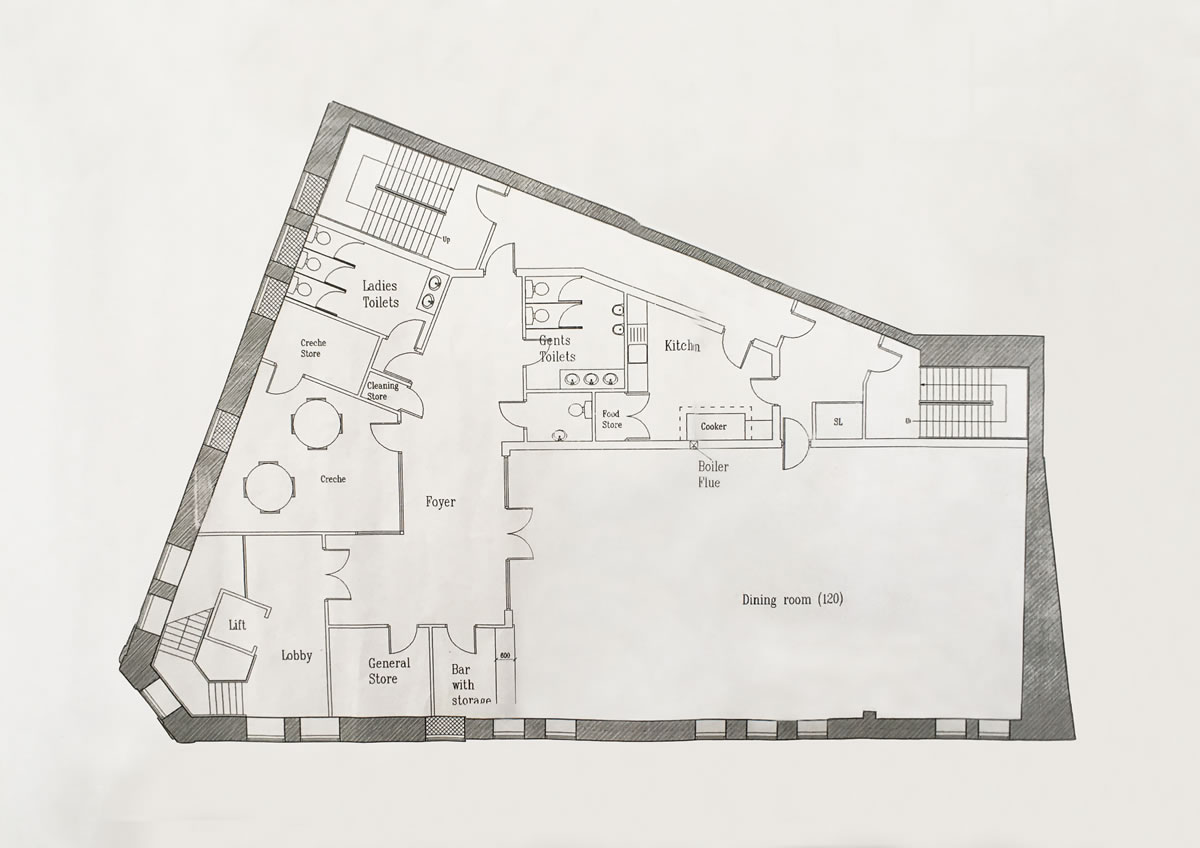 The refurbishment works of 2006 / 07 did sustain the fundamentals which the membership had become accustomed. But the Trustees had a previous ambition of doing more, doing better for the brethren of Belfast, Antrim and Freemasonry in general. By September 2003 the Trustees had envisaged an entirely remodelled Hall. A new multi functional building that would have better served the needs of the Order and surpassed what is presently offered. This concept featured relocation of main entrance, a secondary stairwell, secondary access to shops units, a basement, capacity to change size of both meeting and function rooms and even in 2003 the incorporation of a 5th floor aspect. 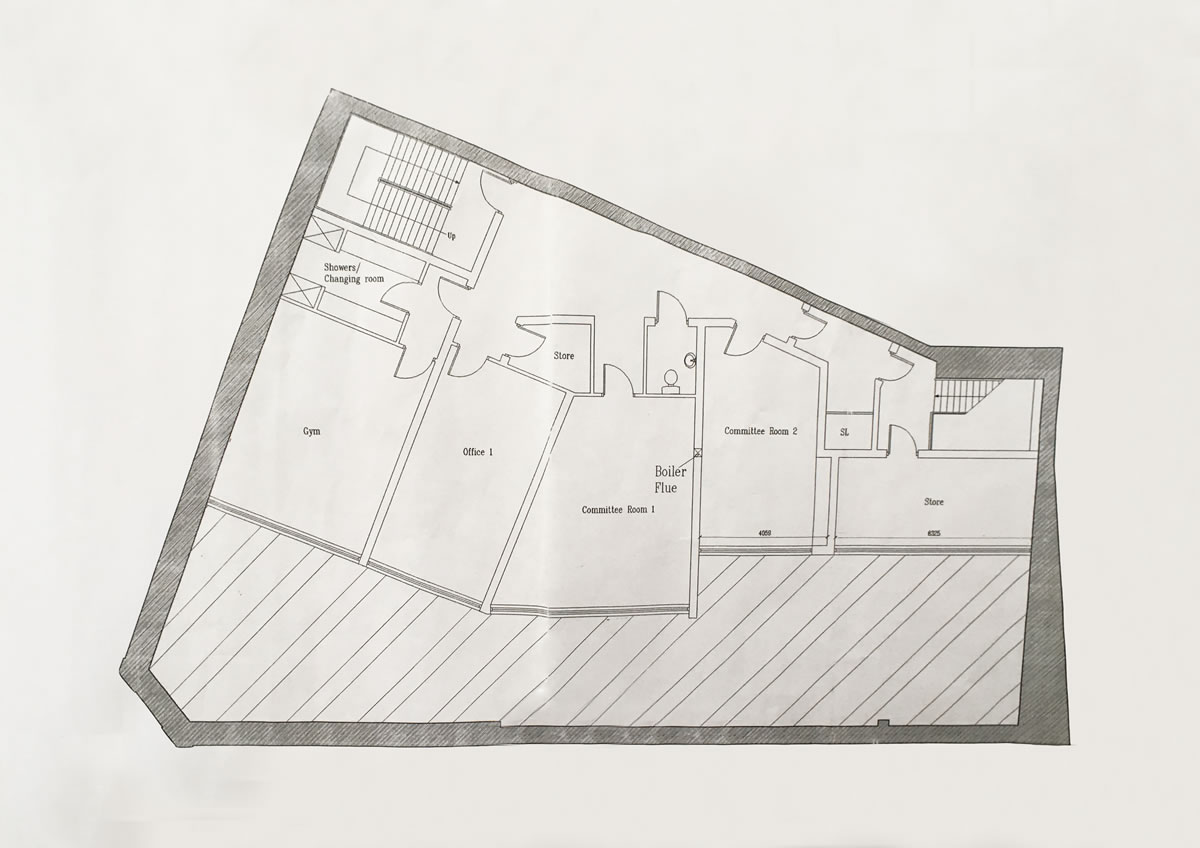 I hope you enjoyed examining the 2003 concept drawings. Whilst this was not achieved it confirmed the feasibility and methodology of good management to every aspect, in preserving Freemasonry in the capital city of Northern Ireland, to what was eventually delivered for the benefit of all who enter.